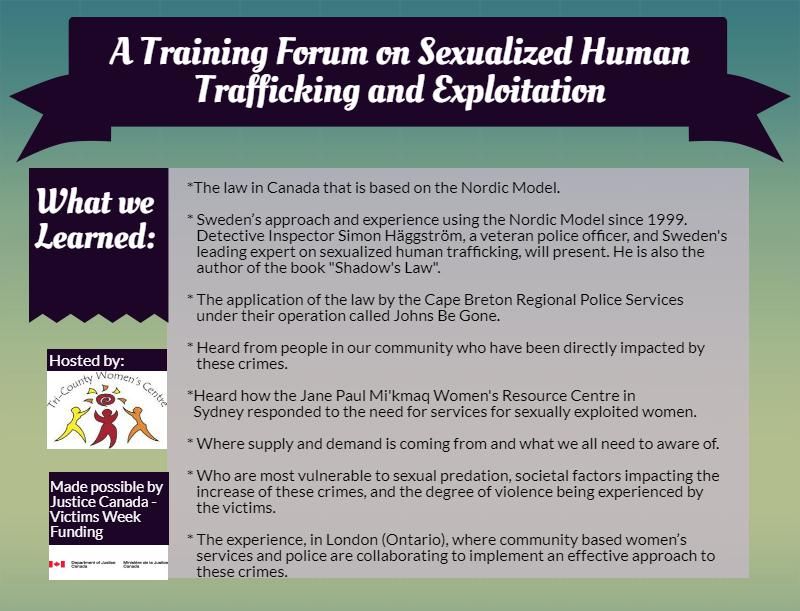 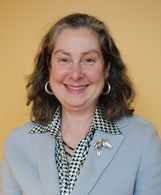 ​
​BIO:
Pamela Rubin, Ll.B., M. Ed., is a Canadian women’s trauma counselor, and consultant on women’s access to justice and trauma-informed institutional responses. She is the author of “A Community of One’s Own” in Restorative Justice and Violence Against Women (Oxford University Press), and Suffering in Silence, a blueprint for sexual assault prevention and healing in Nova Scotia. Pam began her career as a lawyer evaluating justice programming for gender impacts, and decided she liked talking to people more than writing reports. She is currently in private practice as a trauma counselor in Dartmouth, Nova Scotia. Pam is a co-founder of Nova Scotians for the Prevention of Prostitution and Human Trafficking.

​PRESENTATION:
Pamela Rubin, Ll. B., M. Ed. will discuss the legal framework in Canada for addressing prostitution. She will examine the 2014 Canadian prostitution legislation which focuses on the root of prevention: ending demand.
She will explore the Law by examining the difference of the Nordic model from past models, the international growth of the "end demand" or “Nordic” model, and its purpose in human rights.
She will also explore topics such as decriminalizing exploited persons, exploring witness protection and support, focusing on buyers and profiteers, reviewing the “legitimate services” exception and the case law currently in effect in Canada.
Pam will also discuss the Canadian and international human trafficking law and its interaction with the 2014 Canadian prostitution legislation. 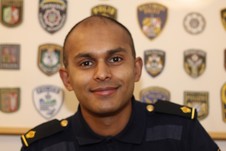 BIO:
Detective Inspector Simon Häggström, National Swedish Police Force, says, “It’s my firm belief that you cannot end prostitution and human trafficking as long as you have men who are willing to buy women and children for sexual exploitation. Sexbuyers are the crucial sponsors of human trafficking.” In 2014, Häggström, received the US-based Malone prize for recognizing sexualizedhuman trafficking as modern day slavery and for being on the frontline of such national and international change. Arresting more than 1000 male buyers, he openly shares his knowledge with many in Europe, North and South America, Cuba, and in Turkmenistan, Central Asia. He authored his work in his first book, Shadow’s Law: The True Story of a Swedish Detective Inspector Fighting Prostitution.

​PRESENTATION:
Detective Inspector Simon Häggström, National Swedish Police Force, has been combating human trafficking and the prostituted exploitation of women/girls since 2007. Explaining the Swedish legislation, his street-work of arresting pimps and buyers, DI Häggström will concretely address how the Swedish police force enforces the legislation that criminalizes buyers but not the women/girls in prostitution.  He’ll explain how to build a case, coming up with enough evidence to prove that a person is a buyer. His work also involves helping victims of trafficking and prostitution, and identifying who the women are that end up in prostitution. Explaining that prostitution doesn’t go underground if you criminalize the buyers, DI Häggström will also address the most frequent criticism against the legislation.

​BIO:
Linda MacDonald, MEd, BN, RN and Jeanne Sarson, MEd, BScN, RN
As human right feminists, activists, and independent scholars, they have, since 2004, shared knowledge on non-State torture (NST) during UN Commissions in New York, Vienna, and Geneva; presenting in Canada, the UK, US, Portugal, Spain, and Turkey. Both received Excellence in Nursing Practice awards and the International Relations Award as members of the Canadian Federation of University Women, which led to a national policy statement on NST, later adopted as international policy by Graduate Women International. Their website www.nonstatetorture.org offers educational materials. Their recent chapter on family-based NST is published in, Women, Law and Culture Conformity, Contradiction and Conflict. Attending the Canadian Nurses Association Meeting, June 21st, they will present their resolution on developing a position statement about NST victimizations.

​PRESENTATION:
This presentation explains our innovative non-State torture (NST) work*, since 1993, supporting women born into families that tortured, trafficked and exploited them beginning when they were children. These families have criminal connections to other like-minded individuals, groups, or rings locally, nationally or internationally. We will share insights into their criminal co-culture, which supplies the demand whereby the vulnerable women and girls are tortured, forcedly prostituted, and exploited into torture ‘pornography.’ Some practice principles of our NST healing work will be shared.
The art and voices of women we have/do support is included. NST is generally not talked about in our communities because of legal discrimination caused by patriarchy and misogyny. This will be discussed to break the silence and expose that NST is a human rights crime inflicted against exploited women and girls.
* Non-State torture is a universal  term developed by Amnesty International that refers to acts of torture committed by private individuals or groups. 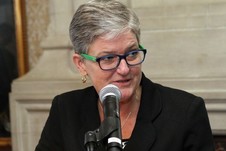 BIO:
Megan Walker
Megan Walker is a lifelong advocate of women’s equality rights. She was an elected member of London City Council for six years. Since 1997 she has been the Executive Director of the London Abused Women’s Centre working tirelessly to end men’s violence against women.
All levels of government seek out Megan for her expertise on women’s issues. She has helped develop numerous federal and provincial laws and policies including the Protection of Communities and Exploited Persons Act; Victims Bill of Rights; and Ontario’s Strategy to End Human Trafficking. She has co-authored three research reports, most recently Choosing the Nordic Model: Championing Women’s Equality and Human Rights.
Megan has developed programs and public awareness campaigns including Choices: Addressing the Needs of Prostituted and Sex-Trafficked Women and Girls; I am Not for Sale; and the Shine the Light on Woman Abuse campaign. She has worked collaboratively with London Police Service for specialized domestic violence and human trafficking units and continues to advocate that police services enforce Canada’s prostitution legislation by charging men who pay to sexually assault women and girls. She has traveled internationally to advocate that governments provide women with their full equal rights before and under the law.

PRESENTATION:
Megan Walker is the Executive Director of the London Abused Women’s Centre, a radical feminist agency renowned for its work in addressing the systemic barriers to women’s rights.
LAWC has provided support and advocacy to thousands of women and has been a trailblazer in advocating for judicial and legislative change to defeat men’s violence against women.
As the scourge of human trafficking increases globally, Walker has led the organization in providing specialized services to trafficked and sexually exploited women and girls, and their often overlooked families.
Walker will share successes in collaborating with police, families, governments and ordinary individuals recognizing trafficked women and girls; and the relentless work required to provide exit strategies that allow them to make real choices in their lives.
She will discuss the advocacy required to work with local, provincial, federal and international police forces to find women and girls trafficked into torture pornography.
Walker will also discuss Ontario’s strategy to end human trafficking and its proposed legislation “The Girl Next Door,” allowing girls to sue pimps.

BIO
Suzanne Patles is a Political Activist and a prominent figure in the Indigenous Resistance Movement. She was active in the Elsipogtog First Nation community’s fight against South West Energy Resources and the Province of New Brunswick in 2013 that stopped fracking in their territory. Suzanne has spoken at a number of forums and universities and has supported other Indigenous grassroots movements across Canada. She advocates for land defense, sovereignty, decolonization, and empowerment of youth and women. Born in the traditional unceded and unsurrendered Mi’kmaq Territory, she is proud of her Indigenous Heritage and enjoys connecting with other people. She is currently volunteering, writing, and attending speaking engagements while raising her three sons.

PRESENTATION
Suzanne Patles will share her knowledge on the impact poverty, racism, social exclusion, past trauma, sex based discrimination, and other inequalities affect Aboriginal Women and their vulnerability to sexual predation and exploitation.
"Collaborating to END demand", can be difficult. She will share with us what service providers can do to become more culturally appropriate, making it safe and welcoming for indigenous women and their families to seek out the services they need.
She will share with us the importance that Mi'kmaq traditional healing has, which includes their seven sacred teachings. These cultural practices provide guidance and protection to Indigenous Women, their environment, and their communities. 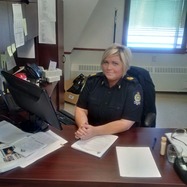 BIO
Sgt. Jodie Wilson was born in Glace bay, Cape Breton. She obtained an arts degree at UCCB, graduated from the Atlantic Police Academy in PEI and was hired by the Cape Breton Regional Police Service in March 2000. She has worked in all three divisions of the CBRPS including, North, East as a detective in investigations and as a Community Liaison Officer, and Central where she was promoted to Sergeant in charge of the Community Safety Enforcement Unit. She is a member of the Public Safety Unit, a Data Master technician, trained Crisis Negotiator, and a Family Violence/ODARA trainer. Sgt. Wilson was the lead on the Johns Be Gone operation in Cape Breton.

PRESENTATION
Sgt. Jodie Wilson, from the Cape Breton Regional Police Services, will share their Johns Be Gone operation carried out in Sydney, Cape Breton in 2015. 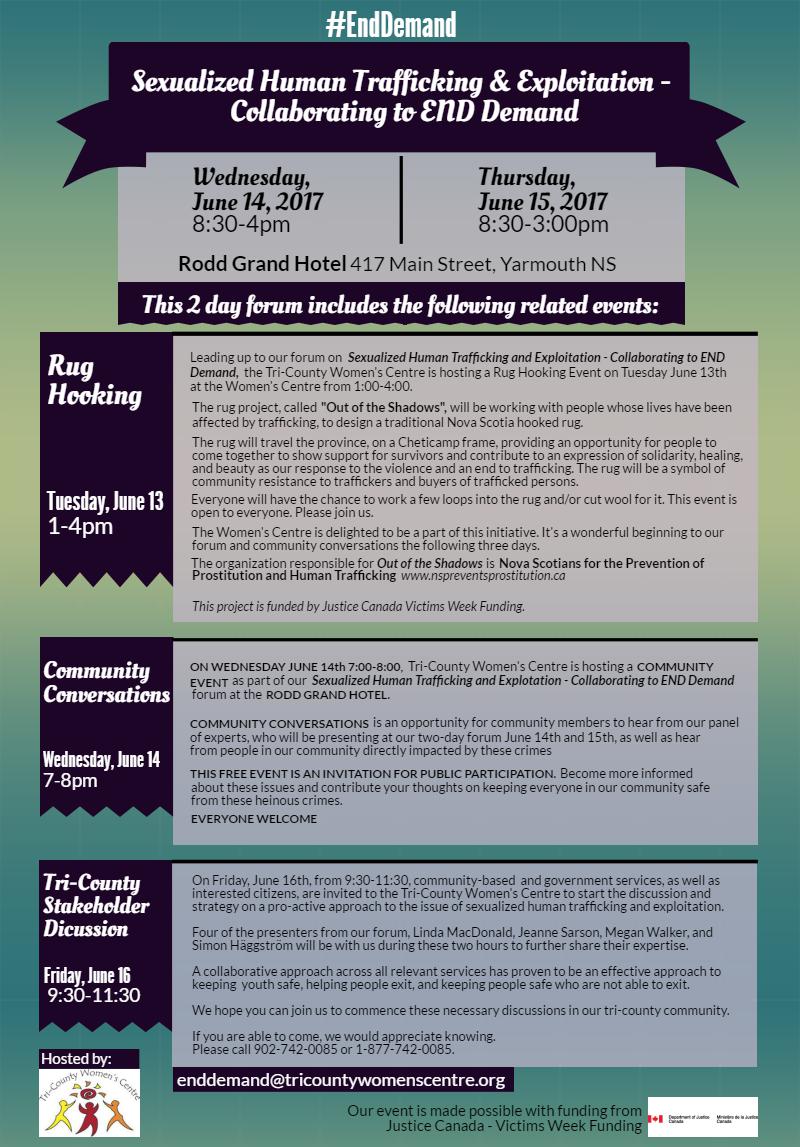 Check out our Facebook page: www.facebook.com/tricountywomenscentre/
Spread the news and share with your friends using the #EndDemand
​